Simon is a Water Resources and Hydropower Expert and Manager with extensive experience in water, hydropower and renewable energy strategy, feasibility and operations both within Australia and internationally. He has worked both nationally in Australia and overseas in SE Asia, the Pacific and Southern Africa. In the SADC region Simon has worked in South Africa, Zimbabwe, Malawi and Zambia in the fields of water resource assessment, water supply, irrigation dam design and construction and irrigation scheme design. In South East Asia, Simon has been involved in a number of prefeasibility and feasibility studies on small and medium hydropower prospects including field investigations and projects economics and optimisation. He played a leadership role in the development of strategy for hydropower management and operation of the complex Tasmanian hydropower system prior to and post connection to the Australian National Electricity Market (NEM). He commenced the hydropower asset refurbishment strategy and was involved in early development of the Woolnorth wind farm. He has been extensively involved in water resources assessment and optimisation at management level for a range of Australian and international hydropower projects including the impact of climate change on hydropower yield. Most recently Simon has been working at the Mekong River Commission as Chief Technical Advisor for the Initiative for Sustainable Hydropower. This programme is aimed at embedding Sustainable Hydropower practices in policy, planning and implementation of hydropower. The works involves policy as well as technical elements. Extensive consultation with member country leadership and bureaucrats has been a key feature of this work. In the hydropower operations company, Simon has managed large divisions and led projects with up to 250 staff and budgets > $100m. Simon managed the interactions with stakeholders on co-use of dams and rivers in the hydropower context. Simon has extensive experience consulting in his field of hydropower, water resource management, renewable energy feasibility and program implementation. A major component of all Simon?s work has been the development of talent and leadership as well as building capacity in the organisations in which he has worked. 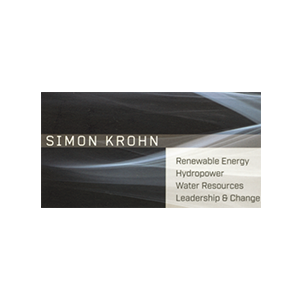