Groundwater is of critical importance to Myanmar’s Central Dry Zone—a 54,000 sq km expanse of land home to almost a third of Myanmar’s population of 54 million people which misses out on much of the monsoon rains which are intercepted by mountains to the west. The Dry Zone is a climatic, geographical location defined as the area where rainfall is less than 1,000 millimetres per year.

Towns with surface water as their primary supply still have large numbers of privately owned and operated tubewells and dugwells. 13,600 ha of formal irrigation schemes are sourced from groundwater, and recently there has been a rapid growth in farmer-managed pumping for small-scale irrigation. However, despite the importance of groundwater to the region, little information has been readily available to support groundwater development and management.

This study revises and updates the hydrogeological surveys and drilling program that begun in the late 1970s to mid-1980s. It represents an understanding of the groundwater resources of the Dry Zone based on decades of experience of hydrogeologists from Myanmar and Australia.

The review describes the status and characteristics of the Dry Zone and provides recommendations which will help to better understand hydrogeological systems and develop effective groundwater management tools.

In June 2017, AWP supported the original 1980s Team Leader—one of Australia’s leading hydrogeologists, Dr Len Drury of Aqua Rock Konsultants (ARK)—to return to Myanmar to undertake a review of the Dry Zone, and to update and complete the book as part of the Ayeyarwady Integrated River Basin Management Project. Assistance was given in-country by the Groundwater Division, Irrigation and Water Utilization Management Department (IWUMD) of the Ministry of Agriculture, Livestock and Irrigation (MOALI). The figures and maps were digitised by International Centre Environmental Management (ICEM), and the text peer-reviewed by the International Water Management Institute (IWMI).

The Hydrogeology of the Dry Zone – Central Myanmar was published in October 2017 and marks a significant conclusion of the Australian investment made to Myanmar (Burma) in the 1980s. The book includes detailed hydrogeological maps and cross sections, and descriptions for the 11 designated areas within the Central Dry Zone. It is available as a free resource, assisting government departments, water managers and practitioners working in Myanmar to better manage the country’s groundwater resources.

A proposal to translate the entire work to Burmese is being considered for the latter half of 2018. 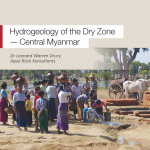 A major study by Dr Leonard Drury prepared with assistance from the Ministry of Agriculture, Livestock and Irrigation (MOALI). The study revises and updates hydrogeological surveys and a drilling program that began in the late 1970s to mid-1980s. It represents an understanding of the groundwater resources of the Dry Zone based on decades of experience from hydrogeologists from Myanmar and Dr Drury’s extensive international experience.

Work on the Hydrogeology of Myanmar’s Dry Zone to be Published After 30 Years [5 April 2017]
Hydrogeology of the Dry Zone, Central Myanmar, published after 30 years [20 October 2017]