Posted on 2 November 2017 Categories: Capacity Development, Irrigation and Agriculture, Vietnam No comments yet

Water security is a growing concern in Vietnam, particularly in drought-affected provinces. Most recently the 2015 -2016 El Nino drought and associated saltwater intrusion affected some 400,000ha of cropland to varying degrees of productivity loss. Urban and rural water supplies were also significantly impaired resulting in around 2 million people lacking access to water in 2015. In response, the Government is taking active measures to improve water use efficiency and water productivity, especially focusing on the agriculture sector since it consumes the bulk of surface and groundwater.

With support from the Asian Development Bank (ADB), the Government is preparing an investment project of $120 million to modernise irrigation water management in five drought-affected provinces. The project which is titled Water Efficiency Improvement in Drought Affected Provinces (WEIDAP) is currently under preparation and will commence in early 2018 and is expected to be fully operational by early 2024. The project consists of 3 components:

The outcome of the Project is climate resilient and modernised irrigation systems providing flexible and affordable services to beneficiary farmers in the five participating provinces.

Between 20-29 October 2017, AWP provided key government representatives from Vietnam practical examples of a modern piped supply system (and its operations and maintenance) for High Value Crops.

The study tour visited parts of the Murray-Darling Basin, as shown on the map below. The tour started in Adelaide with a workshop and travelled to Renmark and Mildura by bus before flying from Mildura to Sydney for the last workshop. The tour visited a very small portion of the basin and ill concentrate on the lower sections around the border of the 3 main states, i.e. NSW, Victoria and SA. 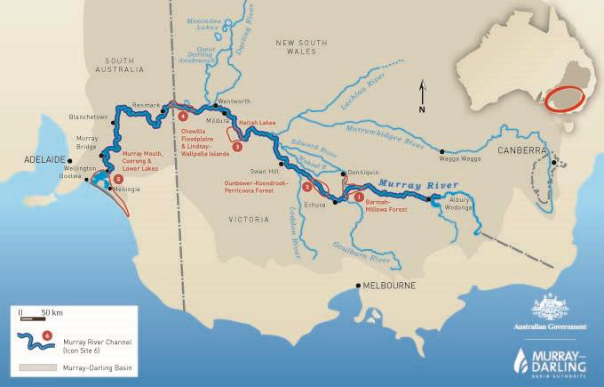 Rob Rendell from RMCG coordinated the technical aspects of the tour and accompanied participants. The logistics of the tour was managed by Australian Water Association (AWA) who have extensive involvement in urban and rural water supply within Vietnam and Ms An Nguyen from AWA served as the interpreter for the study tour.

The key organisations that provided practical examples of modernised irrigation for HVCs were:

A number of specialists and farmers spoke to the study tour over the week and they included irrigation designers, leading farmers, irrigation technology experts and government policy officials.